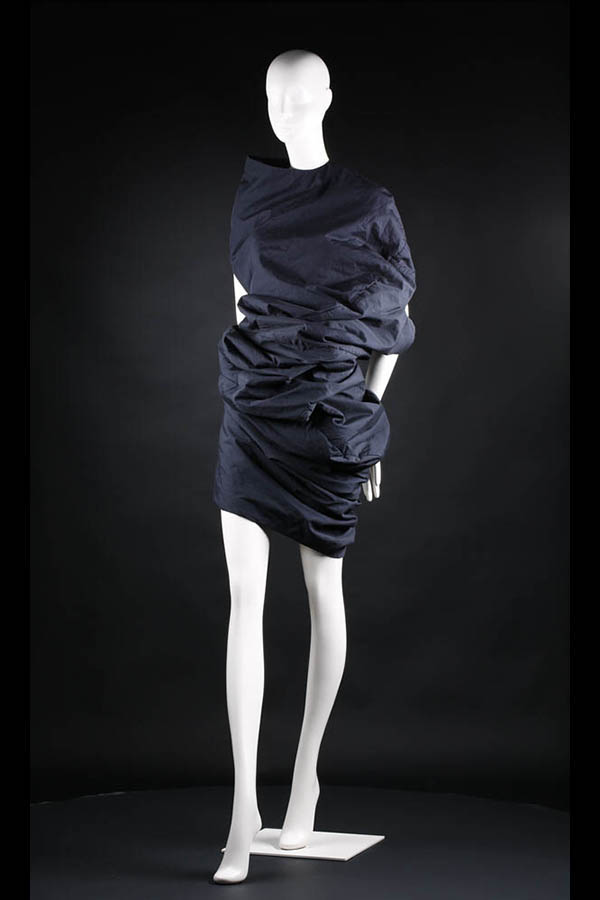 Rei Kawakubo of Comme des Garçons helped to pioneer a 1990s avant-garde aesthetic which scorned the visual language of the hyper-sexualised, body-conscious fashions of the previous decade. Her designs challenge western modern traditions where the garment follows the line of the body, instead drawing on traditional Japanese ideas which treat the relationship between the body and the textile very differently.

Kawakubo’s now iconic Spring/Summer 1997 Body Meets Dress or Bump collection parodied the cultural tropes of female body image. This sample garment for this landmark collection plays with the space between the fabric and the contours of the body, critiquing the notion of there being one ideal shape and encapsulating Kawakubo’s concept that ‘The body becomes dress, dress becomes body.’

The collection made use of 1980s padding but subverted its original intention. Sending unfamiliar shapes down the catwalk, constructed with kidney-shaped down pillows sewn into slip linings, Kawakubo offered an ‘ironic commentary on expectations of women and cleavage-enhancing bras, to a reimagining of the maternal figure and exaggeration of the protruding curves of the female anatomy.’ (AnOther magazine, January 2016)

In the early 1980s, Japanese design revolutionized the world of Western fashion. Designers such as Rei Kawakubo, Issey Miyake and Yohji Yamamoto brought a completely new set of ideas and aesthetics to the catwalk.

Featuring deconstructed tailoring, ubiquitous use of black, shredded knitwear and raw, unfinished edges, Kawakubo’s debut Paris collection in 1981 was initially dismissed as ‘post-atomic’ and ‘ragged chic’. However, her radical and conceptual approach to making clothes quickly changed the face of fashion and more than 40 years later, major designers from Karl Lagerfeld to Marc Jacobs cite her as an inspiration.

Kawakubo has always reacted to preconceived ideas of how women should dress, from her Bump collection to 2005’s The Broken Bride, with its geisha make-up and antique veils, or her 2012 Flat, or 2D collection. Her intellectual take on fashion influenced the next generation of anti-establishment designers, who turn to fashion to voice their discontentment with social and political issues.

Kawakubo launched Comme des Garçons in 1969 without any formal fashion training. She opened her first boutique in Tokyo in 1973 and has subsequently revolutionised fashion retail, launching the famous multi-designer Dover Street Markets in London in 2004 – a fashion retail and concept store with an art gallery spirit, now with additional emporiums in New York, Tokyo and Beijing.

Laid flat, this dress forms a horseshoe shape, with the head and armholes placed at seemingly illogical distances from one another. Inside it is lightly padded and reinforced with tulle to support the curves, and can be worn in a variety of ways. 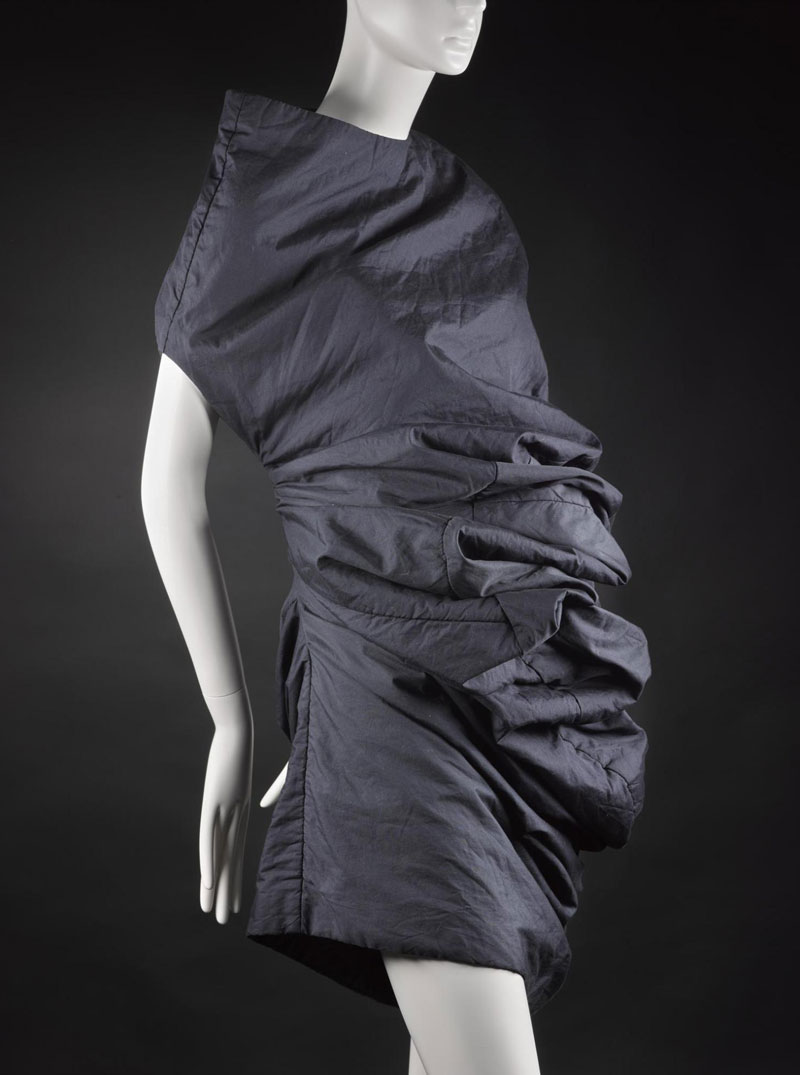 In an interview with Elle magazine in March 2016, Kawakubo described her process: ‘…the starting point must be something I’ve never seen before…I work with patterns like a sculptor. I try to get [the team] not to work on a body, [but] to work on a free space, on a table. The work is basically on flat surfaces.

‘It’s the final 10 percent that is the fabric, when it becomes a real thing. In Comme des Garçons, I hardly do any sketches; there’s no fittings on bodies…In the beginning, there isn’t even a theme…The first thing we do is sit around a table and discuss what we could pick up from daily life, from space. That’s how it starts, completely abstract.’

An interview with Elle